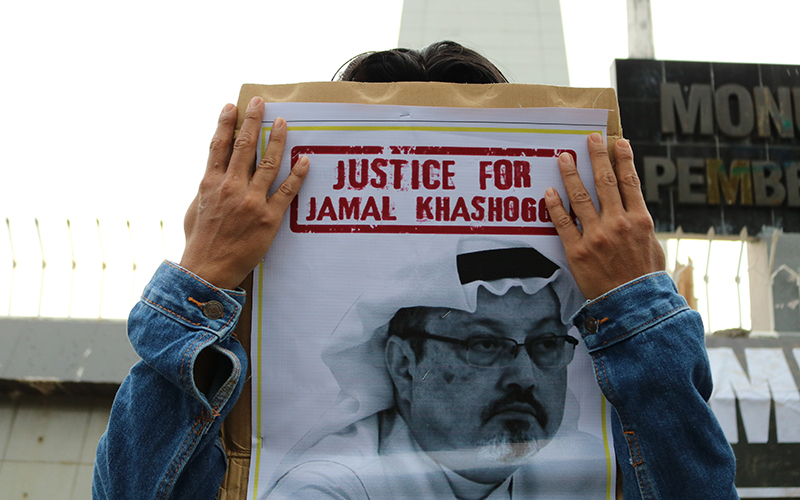 MURDERED: Will the truth about Jamal Khashoggi´s death ever come to light? Credit: Shutterstock

YET again we see a bunch of arrogant, so called world leaders, assassinate someone who disagrees with their policies.
I think this rather bears out my recent column on governments stopping at nothing to eliminate any individual or group that may threaten their positions or control.
However, what worries me about these two recent murders, is the almost unbelievable incompetence of those who organised these utterly despicable ‘hits’.
If their government’s level of intelligence is to be judged by these glaringly flawed acts of murder, it makes me extremely nervous regarding any decisions they may need to make on world issues.
Mind you I was more surprised with Putin’s botched assassination efforts than the Saudis. I did credit the Russian hierarchy as having a bit more savvy than the arrogant bunch who reign supreme over the sandy wastelands of Saudi Arabia.
Having lived among them for some eight years, I can tell you that the only thing they have truly learned from the 21st century is that their money can buy virtually anything.
I do feel however, that with the recent atrocious act of cruelty against this unfortunate Journalist, who wanted nothing more than legal papers for his approaching marriage, they may have just underestimated the intelligence of even Donald Trump.
What they have failed to realise, in their barely disguised threats to disrupt world oil supplies should their explanations not be accepted, is that unlike Russia, heavy sanctions would have them on their knees within months.
They manufacture nothing, grow nothing of note and the heaviest work they are prepared to do is lift a pen to sign some lucrative deal or other. Without their imports, they would very soon be made to realise that you can’t eat oil or weapons of war.
However, having said all that, you can rest assured that it will all sort itself out sooner or later. Money still rules the world and is far more important than the life of the occasional rogue journalist or alleged traitor (or the sacrifice of those they set up to do the job!).
In fact, to these people, wealth is actually more important than many millions of lives, as long as the results cement their positions of power. Mark my words, the faceless money men, who really run the planet, are burning the midnight oil and puffing frantically on their ‘Double Corona’s’ as we speak!
I’m rather more worried about the America/Russia nuclear treaty situation. With two highly arrogant individuals of somewhat flaky intellect in charge of their respective big red buttons, I fear we could soon find ourselves back in the dangerous situation we experienced in the Cold War/Cuban crisis of the Sixties.
This time of course it is far more volatile. Iran, India, North Korea, Israel and Pakistan are now all nuclear powers. In the event of conflict between the East and West, any one of them, under the misapprehension that they could somehow be the last man standing, could bring down the apocalypse the Bible warns against. And if that happens, we can all put our heads between our legs and whistle up our Barcelona’s!
Keep the faith
Love Leapy .
[email protected]
***** Leapy Lee’s opinions are his own and are not necessarily representative of those of the publishers, advertisers or sponsors *****

Leapy Lee's opinions are his own and are not necessarily representative of those of the publishers, advertisers or sponsors. Share your story with us by emailing [email protected], by calling +34 951 38 61 61 or by messaging our Facebook page www.facebook.com/EuroWeeklyNews