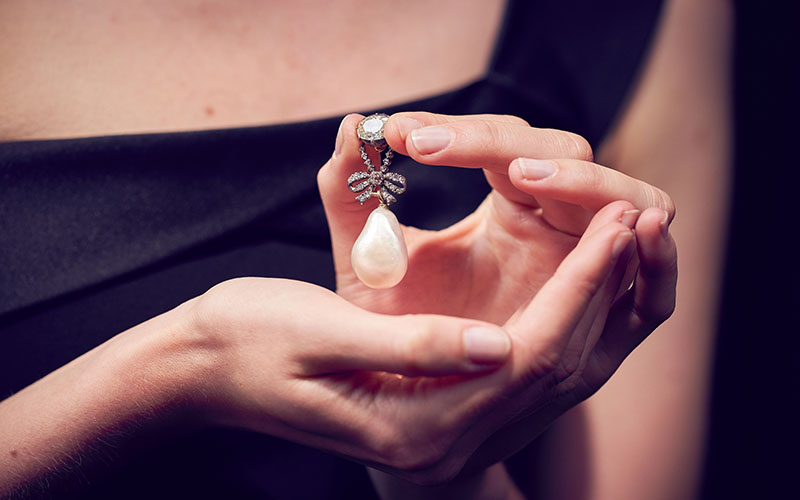 LONDON, ENGLAND - JUNE 12: A model shows a stunning diamond pendant, supporting a natural pearl of exceptional size (26 mm x 18 mm) that belonged to Marie-Antoinette, Queen of France and will be auctioned in the “Royal Jewels from the Bourbon-Parma Family” sale at Sotheby’s Geneva on 12 November 2018 (estimate: $1-2 million), at Sotheby's on June 12, 2018 in London, England. (Photo by Michael Bowles/Getty Images for Sotheby's)

TREASURE is always fascinating and treasures of the rich and famous even more so.
What happens when the famous person is Marie Antoinette one time Queen of France.
She was a royal lady renowned for suggesting that the poor ought to eat brioche if bread were in short supply. Queen Marie Antoinette also owned famous jewels, famous now and also famous back in her own day more than two centuries ago.
A selection of these jewels long held by the Bourbon Parma family came to market in November in Geneva, Switzerland in association with a total of 100 treasures and exercised an irresistible magnetic allure for collectors. In these modern times most did not travel to Sotheby’s Geneva, though bidders from 43 countries took part with most registering their participation on-line.
Fully 25 per cent of the bidders were new to Sotheby’s – a further demonstration of the regal fascination of Marie Antoinette and jewellery with a Royal provenance or history.
These jewels have an extraordinary story. Before her arrest and subsequent execution Marie Antoinette wrapped her pearls, diamonds and rubies placed them in a chest and sent them to Brussels. From there they were taken to Vienna and in to the safe keeping of the Austrian Emperor, her nephew.
The jewels were restored to Marie Antoinette’s daughter Madame Royal following her release. The jewels in time passed on to the Bourbon Parma family with whom they remained for the next two centuries.
A ‘white glove sale’ is an auction where every lot or item in the sale is actually sold. A ‘white glove sale’ is not common.
The sale at Sotheby’s Geneva was one such, every lot sold. Bidders entered into a competition with a disregard for pre-sale estimates driving 90 per cent of prices in the sale beyond expectations.
The star lot was a natural pearl and diamond pendant from Marie Antoinette’s personal collection. Pre-sale estimates were in the US$1-2 million.
In fact such was the competition that a new auction record for a natural pearl was reached with the final bid at US$36,165,090 leaving the initial estimate far behind.
The pendant was among 10 exquisite pieces which were once owned by Marie Antoinette, all of which attracted fierce competitive bidding. Together they realised US$42.7million as against a pre-sale estimate of US$1.6 million to US$2.9 million.
One of the most personal and intimate Lots in the sale was a monogrammed diamond ring bearing the initial MA, for Marie Antoinette, and containing a lock of her hair.
This precious ring was also the object of a fierce bidding competition selling for more than 50 times the pre-sale estimate of US$8,000 to US$10,000, finally realising US$447,000.
Meanwhile an exquisite diamond brooch supporting a yellow diamond also captured the attention of jewellery lovers and achieved an astounding US$2,099,793 as against an estimate of US$50,000 to US$80,000.
What’s in a name? More than only a name, a reputation adds enormously to the appeal of treasure to all who are fascinated by jewels.
A jewel’s history, provenance and associations captures the heart, stirs the emotions and drives the impulse to acquire and collect.
The perfect conditions for a ‘white glove sale’.
Nick Horne, London, England