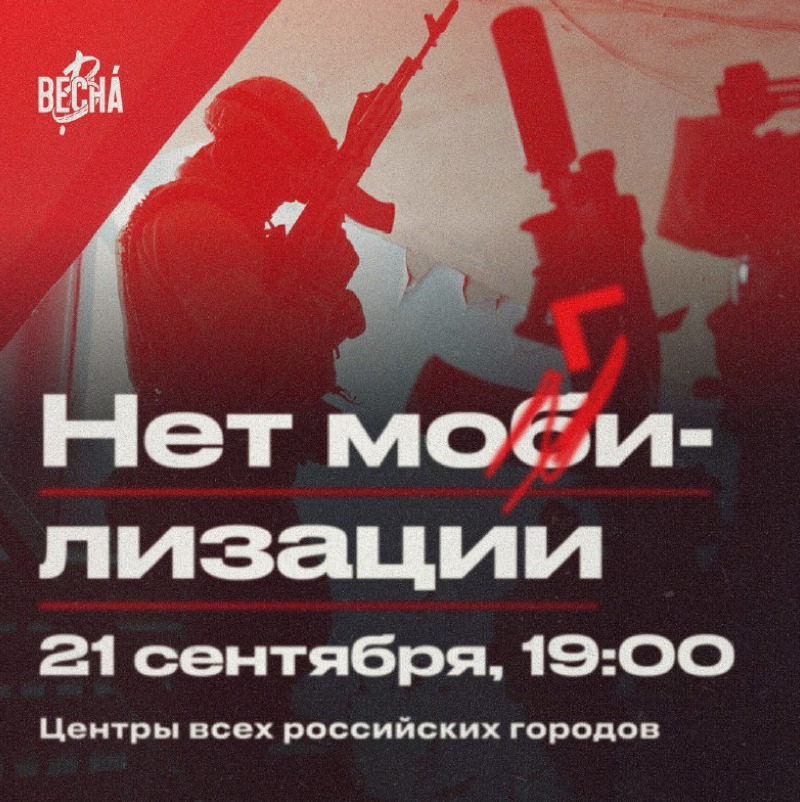 Russian anti-war movement “Vesna” called for the nationwide protests against mobilisation in a statement on their official Telegram that read:

“Vladimir Putin has just announced a “partial” mobilisation in Russia. This means that thousands of Russian men – our fathers, brothers and husbands – will be thrown into the meat grinder of war.”

“What will they die for? What will mothers and children be shedding tears for? For Putin’s palace?”

“Now war will truly come to every home and every family. The authorities used to say that only “professionals” were fighting – and that they would win.”

“It turned out that they would not – and prisoners began to be recruited to the front. And now mobilisation was announced.”

“So the situation is extremely grave. The war is no longer “out there” – it has come to our country, to our homes, to our loved ones.”

“And they must die to right the wrongs of Putin’s regime, which has plunged Russia into horrific carnage, isolation and poverty.”

“The deputies and officials who screamed daily about the need to mobilize will remain in their warm chairs – alive and well.”

“We believe that it is they who should be mobilised and sent to Ukraine – let them die for their own sick fantasies, rather than sending ordinary guys to their deaths.”

“”Vesna” announces an all-Russian action against mobilization – we urge you to take to the streets of Russian cities today at 19:00.”

“We will announce the locations in Moscow and St. Petersburg shortly. In the regions, we encourage anti-war initiatives to select locations independently – and advise us in the bot, we will publish the list.”

“Sign up for “Vesna” and enable notifications, so you don’t miss the publication of the locations!”

“The protest action is just the beginning. We are confident that the decision to gravely protest could be the end for this government. The country needs to get out now. Everything is in our hands!”

“📍 The centres of all Russian cities”

The news comes after Russian President Vladimir Putin announced partial mobilisation in the Russian Federation, as reported on Wednesday, September 21.