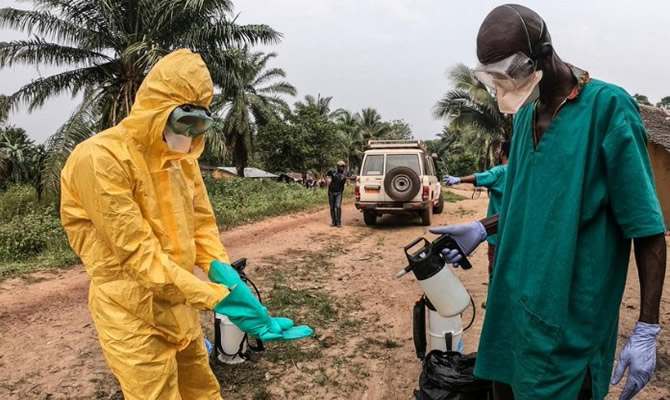 Image of WHO staff in Uganda. Credit: [email protected]

The World Health organisation (WHO) has bolstered its Ebola disease outbreak response in Uganda.

Authorities in Uganda are investigating the recent death of a patient in a suspected case of a strain of Ebola. Seven cases of Ebola have been confirmed in the country this week, a virus for which it currently has no vaccine.

A 24-year-old man who died was initially being treated for malaria but was later diagnosed as having contracted the Sudan strain of the Ebola virus. It is believed that a second patient may have also died from the same virus but this has yet to be officially confirmed by the authorities who are carrying out tests to establish the cause of death.

In Uganda, it's believed a 2nd person, a young child, has died of ebola in a hospital in the centre of the country. Tests are being conducted to confirm the cause of death. Health officials say the deceased was one of 14 people admitted to hospital with ebola-like symptoms.

As reported in a statement released on Thursday, September 22, an accelerated effort to scale up the response to the Ebola disease outbreak in Uganda, the World Health Organization (WHO) is delivering medical supplies, providing logistics, and deploying staff to support the national authorities in halting the spread of the virus.

There is an outbreak of #Ebola in Mubende District. Ebola is a deadly yet preventable disease.

Read more to know how it is spread. Report all suspected cases to the nearest health facility immediately! #EbolaOutbreakUG pic.twitter.com/DwU8k42nMW

JUST IN: #Uganda is investigating recent deaths of patients as suspected cases of a strain of #Ebola, for which the authorities do not yet have a vaccine. The country has confirmed seven cases of Ebola, including in a man, who died this week. pic.twitter.com/z0AruAtxxU

The Sudan ebolavirus is one of the six species of the Ebolavirus genus. Forty-three contacts have been identified and 10 people suspected to have caught the virus are receiving treatment at the regional referral hospital in Mubende, the district where the disease was confirmed this week. This is the first time that Uganda has detected the Sudan ebolavirus since 2012.

Mubende is in the central region of Uganda, about a two-hour drive from the capital Kampala. It sits along a busy road leading to the Democratic Republic of the Congo. There are gold mines in the area, which attract people from different parts of Uganda, as well as other countries. The mobile nature of the population in Mubende increases the risk of the possible spread of the virus.

A technical team has been deployed to the Mubende district by the WHO to support surveillance, infection prevention, and control the management of cases. They will also assist in the activation of surveillance structures in neighbouring districts. Five international experts will be deployed, with numbers increasing if needed.

“We are acting quickly and decisively to draw the reins on this outbreak. Our experts are already on the ground working with Uganda’s experienced Ebola control teams to reinforce surveillance, diagnosis, treatment, and preventive measures”, said Dr Abdou Salam Gueye, Regional Emergency Director with the WHO Regional Office for Africa.

“Africa’s stronger homegrown emergency readiness is proving ever more crucial in tackling outbreaks such as Ebola”, he added.